The Cologne-based artist Alireza Varzandeh reveals day-to-day life, the structures and customs of society to us as if through a looking glass. From boisterous beach scenes to urban construction workers, passers-by and cyclists in traffic, people walking in the park, in rain and shine, to extremely colourful floral still life scenes – there does not seem to be any subject that is unworthy of painting or uninteresting from the composition perspective for this artist, who was born in Persia in 1963. 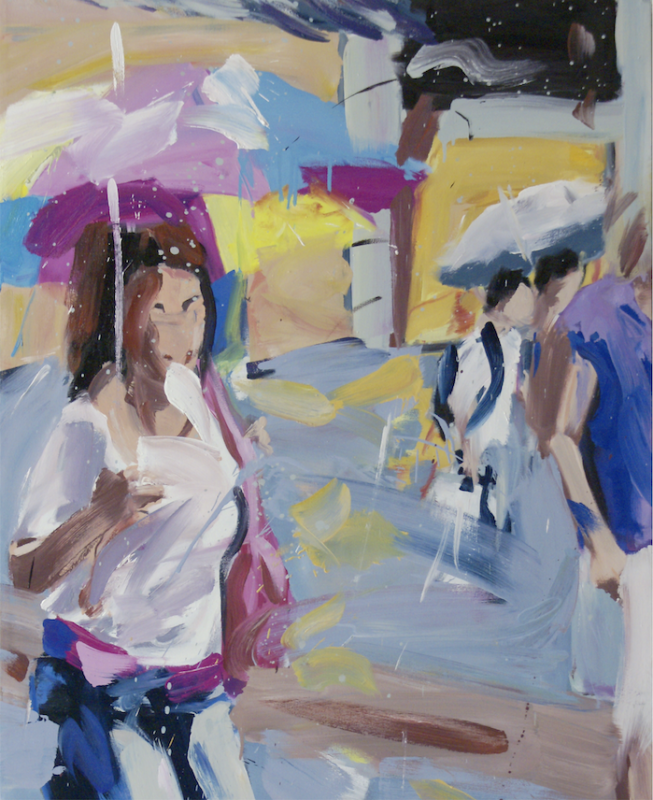 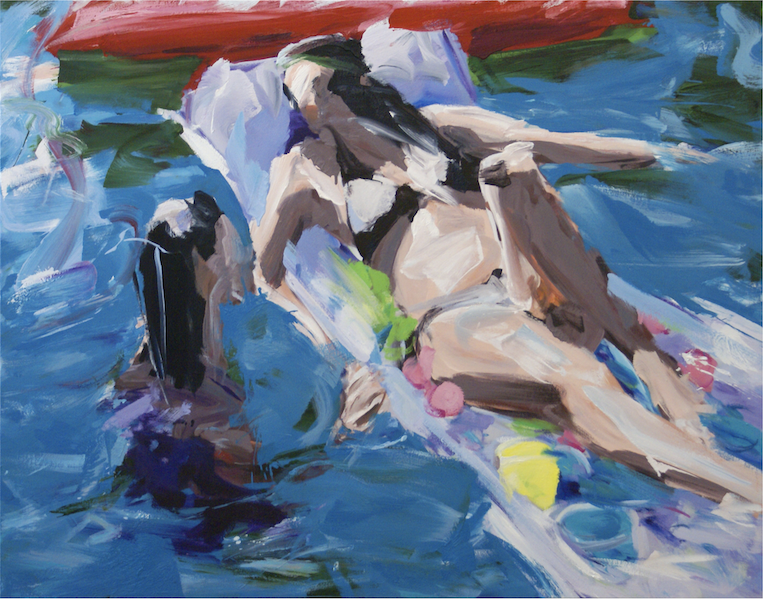 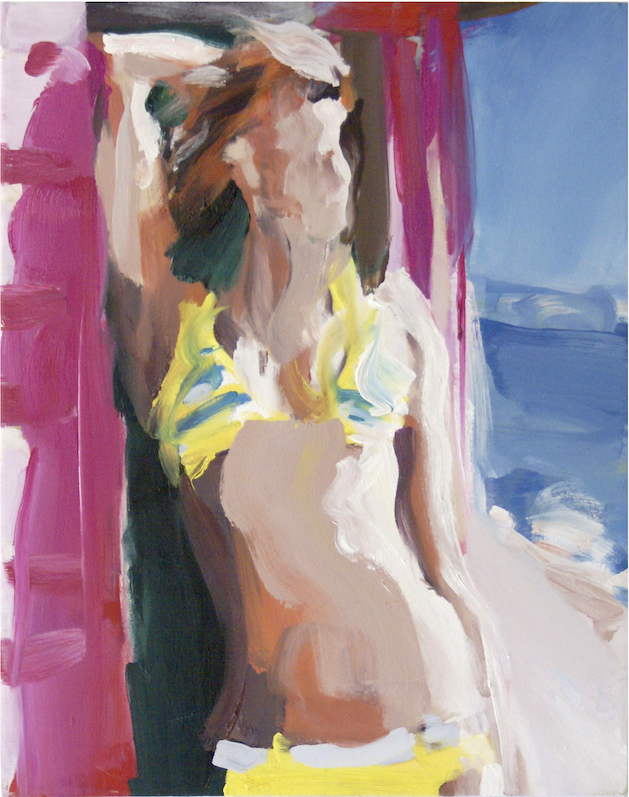 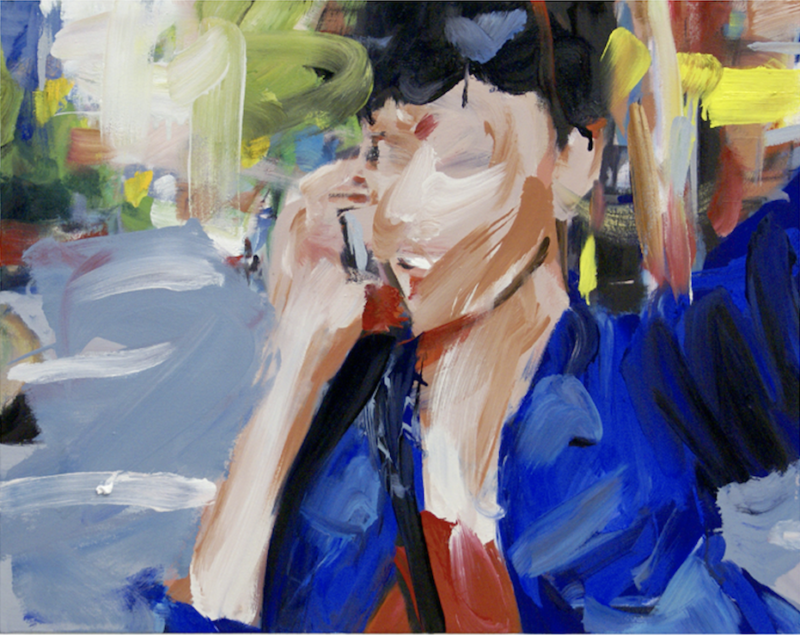 As if he were using a zoom lens, Alireza Varzandeh creates extreme close-ups of selected scenes of vibrant, fast-paced contemporary life and brings them to a standstill for a brief moment.

The viewer is spontaneously and unexpectedly drawn into the pictorial narrative and cast under the spell of his works thanks to the extensive color palette, purposeful placement of shadings, reflections and light accents.

As when adjusting the focus of a camera lens, the motifs of the paintings are initially sketched on canvas in abstract form, then applied in great detail in oil, only to be subsequently painted over again, thus creating an abstract, more objective view.

During this work process, the artist himself already appears to go through the individual steps that the viewer also experiences when standing before the completed work – alternation between close-up and long-distance views as well as simultaneous recognition and blurring of the subject of the painting. The effect that is generated is a seemingly abstract and literally vibrating surface texture that virtually forces the viewer to maintain a certain distance in order to be able to absorb the painting’s motif in its entirety. For it is only by gaining some distance from the canvas that it is possible to combine the ostensibly expressive interplay of light and colour into a greater whole in our mind’s eye. The paintings themselves do not impose any concrete perspective; on the contrary, the artist seems to take advantage of the viewer’s movement in front of the canvas in order to intensify the dynamics of the pictorial narrative by constantly changing the angle of view.

The pictorial abstraction that is achieved through expressive over-painting of the picture’s surface leads to blurring of all individual facial features of the people portrayed. That essentially creates human figures with a lack of individual characteristics, thus allowing every viewer to identify with what is depicted and thus maintaining a link between picture and viewer.

Inspired by the use of light in the paintings of Rembrandt and those of the Impressionists, Alireza Varzandeh transplants those historical approaches to the colour and light effects of our era. Movement and dynamics of the respective pictorial narrative are transported to the canvas in an abstractly expressive fashion by means of rapid brushwork in the form of systematic over-painting of the underlying image that was previously created in an almost photo-realistic manner. Objective shapes are dissolved into free-form areas of light and colour, the facial expressions and gestures of the people depicted are transformed into fields of tension and dynamic sequences of action that convey the moods that are experienced to the viewer and put the momentary standstill that was captured previously into motion again.

This work method, which initially seems destructive and which dissolves the manifest perfection of the depicted subjects into free-from shapes, produces paintings that – in and of themselves, without any interpretation of the pictorial motifs – represent the current spirit of our age and its fast-paced social structures and are simultaneously capable of fascinating the human eye thanks to their powerful interplay of colours and shapes.

The objective of the artist does not appear to lie in a desire to realise what he has observed as a true-to-nature snapshot in painted form, and thus to compete with photography or even with Nature itself. His goal is to identify the dynamic structures and sequences of movement, capture them on canvas and thus transcend the limits of painting – its purported lack of capability of reporting on a continuous event or recording motion itself.

For the viewer it is hardly possible to perceive only that one single moment, the instant of standstill in the midst of the movement of the occurrence. Quite sub-consciously, he associates a before and after based on his own sphere of experience, classifies what he is seeing into a context and thus contributes towards the creation of a narrative structure within the picture. In this way, the viewer himself is entrusted with an important position within the development of the pictorial concept.

The artist very deliberately implies the participation of the viewer, thus again achieving an interrelationship between the pictorial space and the viewer’s space at the content level. On the one hand, the pictorial motifs gathered from day-to-day life make it possible for nearly every viewer to identify with them; on the other, the contextual understanding of the viewer serves to create a narrative level so that the complete message of the painting only emerges with the aid of the viewer’s participation.

However, this proximity, which the artist generates between the viewer and the work of art, is interrupted once again by the spatial distance from the picture that the viewer must maintain in order to even be able to comprehend the motif of the painting.

Therefore, the result is constant alternation between proximity and distance, motion and standstill, in terms of the design elements that Alireza Varzandeh uses in his painting as well as with respect to the content-related message. Moreover, the viewer seems to be earmarked as an essential participant in every regard, which consequently forces him leave the role of a merely passive observer behind.